Keyframe-Entertainment has been involved in the production of XR/music/Tech events, film screenings, and conference afterparties for many years. Below you’ll find a list of past tech events. For our upcoming events, please visit our New & Recent Events page. 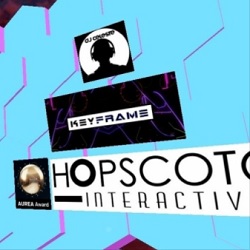 This event was hosted by Hopscotch Interactive. DJ Keyframe joined on the balcony with his chill mix: https://soundcloud.com/keyframe_entertainment/hopscotch-interactive-mix

After the official part of the AUREA Awards concluded, attendees were invited to meet in the Community afterparty in AltspaceVR for an  opportunity to network and meet members of the jury, award finalists and AUREA award winners. Event was hosted by Keyframe at DJ Celeste’s new world CLUB ZENITH, where she also performed on TribeXR.

In 2018, Keyframe-Entertainment hosted an event at San Francisco’s Great Northern focused on the intersection of Electronic Music and VR. Fast forward to October 2020, DJ Celeste teamed up with Keyframe to host a VR event Producers Mixer & Tech Talks in Altspace to continue the discussion of the exciting evolution of events and festivals in VR. The goal of the mixer and tech talks was to continue building bonds within the AltspaceVR community, and share experiences so that event organizers, aspiring world builders, and performers can have a more thorough understanding and potentially inspire the expansion of new ideas moving forward into the future.

“During a time when many are unable to gather in person, something truly wondrous has emerged — dozens of imaginative Universe creators built an ever-expanding virtual Burning Man Multiverse comprising 8 virtual Universes described below, a virtual Temple, and a globally distributed Man Burn,” says Burning Man. Keyframe is honored to have had a DJ performance at Wisdome and The Mushroom, booked alongside Reggie Watts.

Julian Reyes was a media partner for VRX Conference & Expo, which provides a forum between some of the world’s largest brands and investors to discuss strategies for getting XR successfully integrated into the workplace, the public domain and into people’s homes. VRX 2019 highlighted case studies from global brands spanning more than 10 key verticals across the XR ecosystem. https://events.vr-intelligence.com/vrx/

Keyframe was in the Viveport house giving Tribe XR a spin. He put his years of DJ knowledge into the VR experience and the results were amazing. On October 17th @The Great Northern in SF, Keyframe showcased the intersection of VR and Electronic Dance Music with talks from Nathan of Survios (Electronauts), TheWaveVR, TribeXR, The Virtual Rave and SwanVR. The event included demos from High Fidelity, Exit Reality, Liquid Light Project, NewPathVR, Visual Reality, and performances by Solar Theory, Torkom Ji, and Michael Strauss. The event was co-produced with ImagineX Productions and ARTandVR, and had sponsor support from SUBPAC, Pyramind, Chronos Global Academy, VRARA, EMA and the VRS Conference. View our trailer video below, and visit our Convergence event page. Keyframe is the Producer of Director Fifer Garbesi‘s project “Con Te Damanhur”, a Virtual 360° experience of Damanhur, the “laboratory of the future for humankind.” This project offers a rare opportunity to glimpse into this ecovillage and spiritual community situated in the Piedmont region of northern Italy.

Keyframe sponsored the Visual Reality area at VRLA on May 4-5, 2018.
VISUAL REALITY has been bridging the gap between art, technology and consciousness since 2016. They design experiences and produce events that open hearts, lift spirits, and blow minds.
Their pioneering multi-sensory events blending VR with psychedelic augmented art, live audio/visual performances, and sound healing meditations provide a unique perspective on conscious entertainment and transformative technology, as well as an engaging restorative experience.